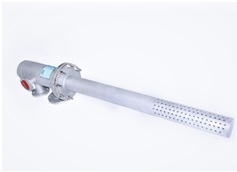 A de-aerator is a device that removes oxygen and other dissolved gases from water, such as feed water for steam-generating boilers. Dissolved oxygen in feed water will cause serious corrosion damage in a boiler by attaching to the walls of metal piping and other equipment and forming oxides (rust). Dissolved carbon dioxide combines with water to form carbonic acid that causes further corrosion. Most deaerators are designed to remove oxygen down to levels of 7 ppb by weight (0.005 cm³/L) or less, as well as essentially eliminating carbon dioxide.

De-Aerator is a dome shaped device [called the mixing unit] fitted to the Feed Water Tank, having three Nozzles for Cold Make up Water, Recovered and recycled hot condensate and Flash Steam. It also has a top vent nozzle with automatic thermostatic vent. The three nozzles result in mixing of the three fluids, consequently heating the water and the Oxygen thus released is vented out from the top.